A couple new greeting cards for the Ephemera DB

I gather that updates to the Ephemera DB remain at a standstill, but I’ll go ahead and upload my two newest acquisitions so you’ll at least have them available when you eventually get a round tuit.

The first is a variation on the second card that I included in this post last year. The design is the same but the text differs, since that one was for Christmas and this one appears to be for Easter. Also, the Tuck logo on the back of this one is “London Registered” rather than “Prize Exhibition Series”, as was on the previous card. The size is the same, 4.375"H x 3.125"W. 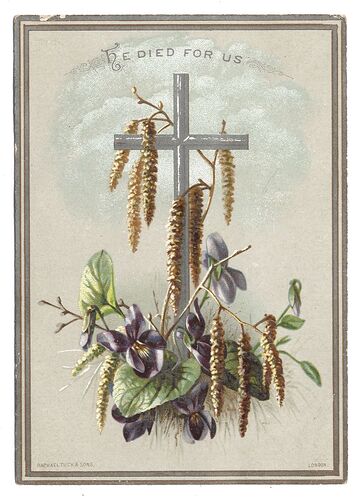 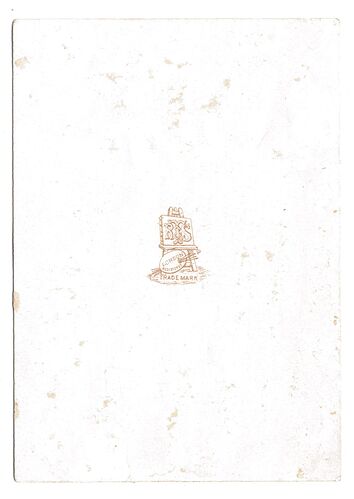 The second card is a die-cut Christmas card with two dogs drawn by Helena Maguire and captioned “No followers allowed”. I found one other card in your DB that uses the same drawing, but it’s in a totally different style. In fact, I couldn’t find any other cards that use this die-cut dog house shape. The verse on the back is by Frederick Langbridge (unfortunately rubbed out in places on my card). The size is approximately 3"H by 4.25"W. The Tuck logo just indicates “Artistic Series”, with no number. 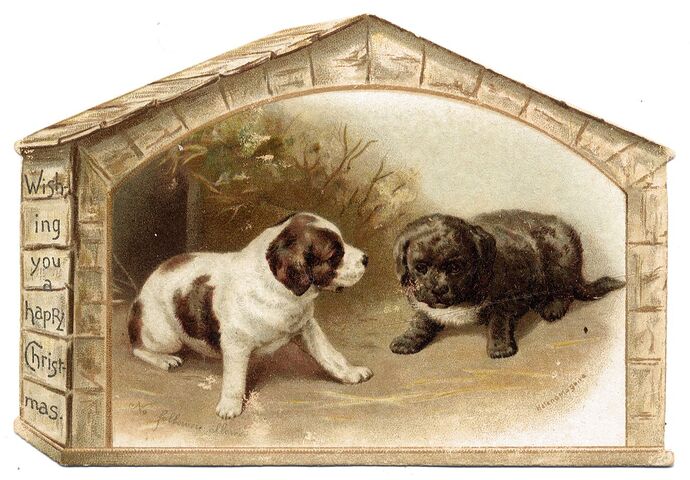 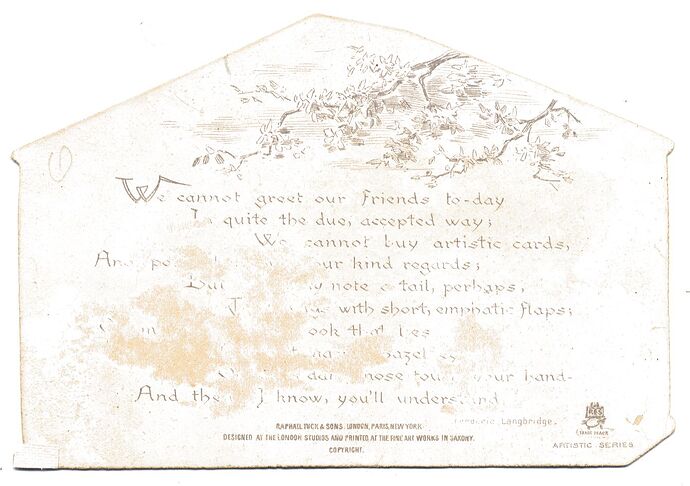 BTW, a couple notes on that other dogs card I referenced. Your entry states “possibly Helena Maguire (unsigned)”. In fact, it really is signed, in the same place as my card shown above, but seems to be mostly washed out in that scan. If you play around with the image settings a bit (contrast, etc.), you actually can make it out. My second note would be a suggestion to add a “Dogs” category tag to that entry, since you do have such a category and it certainly is a primary subject for that card. If I didn’t already know the link to that card, I would have had difficulty finding it.

@jrbuck99 thanks again for those uploaded.

Ephemera is still being worked on, but it’s harder for myself to contribute because it’s not as simple as postcards with clear sets, I’ve forwarded these items to Alison and I’ll respond here when we find a spot for them.

No problem, @justintanner. I just figure it’s better for me to upload them now, while they’re fresh in front of me, rather than to wait until Alison gets caught up. I’m getting older and grayer by the minute, so it’s not wise for me to put off until tomorrow, etc.

At least some of the ones I uploaded to the original “Contributing…” thread last year did have numbers, or at least seemed to fit into existing sets, so if you wanted to, you perhaps could help out Alison with those.

@jrbuck99 thanks for all those links that makes it easy for me, here’s one card added.

@jrbuck99 The grey finches are added.

I think that got them all, let me know if I missed one.

Wow! @justintanner has been a busy boy this evening!

I think that catches all the numbered cards that I posted last year, at least the ones that fit into existing sets in the DB. A few others had numbers, but as yet there don’t seem to be any corresponding cards in your DB with the same number. Grouping the rest into sets is more problematic unless there are Tuck catalogs, ads or price lists that they can be tied to.

I did catch one minor error in your additions. The caption on that two goats pulling a carriage card is actually “A HAPPY CHRISTMASTIDE”, which is different from the other two cards in the set.

I’m also thinking you might want to add “Artistic Series 2275” to that last card, the CUCKFIELD, SUSSEX “Peaceful Christmas” one. I would assume the WIVELSFIELD, SUSSEX card also carries that number, although since the back of that card isn’t included in the DB, it’s just an assumption.

Thanks for all your hard work, Justin.

Good catch on those data entry errors, they are fixed.