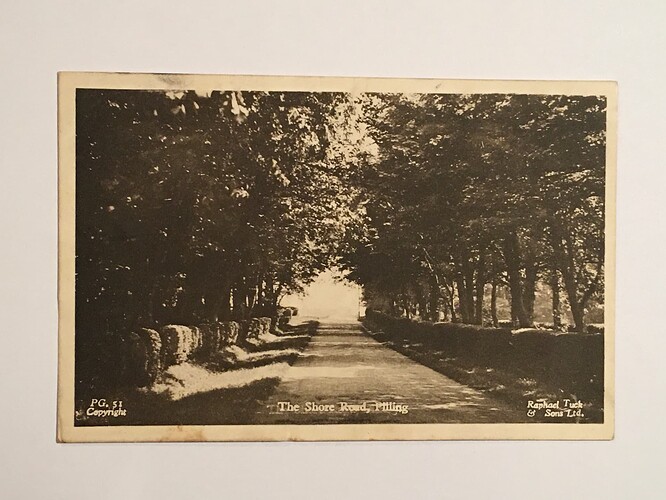 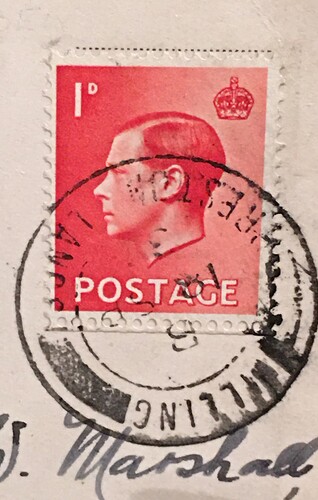 @Peter Welcome to the forum!

Do you have a full picture of the that postcard back so that we can upload it?

Hi - the back of the card 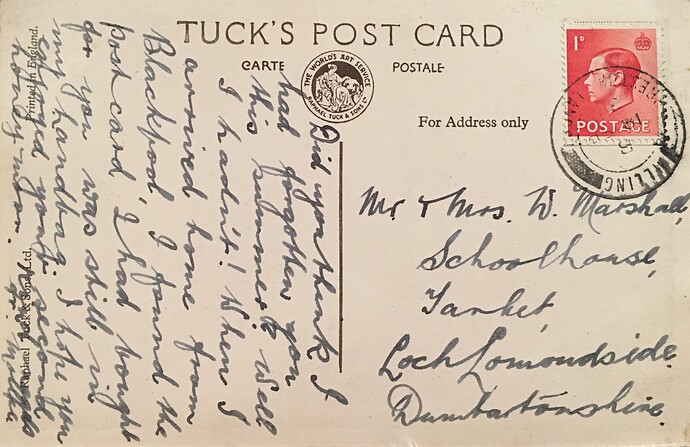 Let me know if you need any more

@Peter thanks for the great scan, I’ve uploaded the back, and updated the first use.

I have been trying to work out why there are so many of these 1930’s PG (Pilling) Tuck cards that are unused - even though there are many other postcards for the same locations and dates that were used more or less straight away.

Price could be a factor, if the Tuck cards were more expensive than locally produced ones. I suppose it’s possible that there was something delaying the supply of the cards to the local outlets and the outbreak of WW2 affected sales - but delay by years is stretching it a bit . . .

The photographer A.F. Sergeant, who I believe founded Lilywhite in 1910 and used some of these PG images on Lilywhite cards, moved to Tuck in the 1930’s - but I don’t know exactly when - maybe you do? Perhaps his move, bringing PG images with him and maybe creating new ones around the time of his move, was a factor in the timing of the production of the Tuck cards?

The dates when the few used cards were actually used are also a bit of a mystery. The 1937 card seems exceptional in being used when you would expect it to be. I have a PG41 (The Putting Green, Golden Ball) “Prince of Wales back” card - which must have been printed before Edward became king in Jan 1936 - that was only posted in 1948! I suppose we have to put that down to outlets continuing to offer cards from stock that they had paid for, so long as the subject matter was still of interest to visitors.

Thanks for your site and your interest!
Peter

HI-Many thanks for your observations. I have less knowledge than you in regards to the timimg of the use of the cards. I suspect you are correct in that the images were actually taken previously and made into postcards years later. My father would have known more as he had an interest in the Lilywhite/Tuck overlap but he has passed away and we can only guess. Alison

Sorry to hear that your father and his knowledge have passed on - as must we all eventually, but it’s hard when it’s a parent - and we always wish that we had asked more while they were still around . . .

My ‘google’ research showed that Arthur Frederick Sergeant founded the ‘Halifax Photographic Company’ followed by ‘Lilywhite’ in 1910 - first at Dunkirk Mills, West End, Halifax. In 1921 he moved Lilywhite to Lumb Mills, Mill Bank, Triangle, Halifax and took over ‘Arrow’ postcards for a while during the 1920’s. They were later bought by H.E.Howarth - a Fleetwood photographer who founded his own postcard company in the early 1900’s.

In 1931 a fire at Lumb Mills destroyed the factory, along with their stock of negatives and prints. So Lilywhite cards that are printed as produced at Triangle, Halifax were produced before 1931.

Arthur then moved Lilywhite to Sowerby Bridge and later to Brighouse, before selling the company to A.H.Leach.

Apologies for ‘going on’ a bit - as you probably know all this - but I thought it might interest others and save them a bit of ‘google time’. Maybe others will know more and correct any false information. As I said, I’d be very interested if anyone has a lead on exactly when Arthur moved to Tuck in the 1930’s.

Hi-many thanks for all of that. I did not know any of it. My father mostly dealt with the cards in the later years and I did the ephemera. I have a box or few of lilywhites that he kept. I will put this printed info with them and exam them in relation to timing when I get to sorting and moving them on. I will let you know if I come across anything of interest. Alison